Earlier this year the trustees agreed to invite the Worcester Polytechnic Institute (WPI) to carry out a project for the WCA as part of one of their student research programmes.  This followed several successful collaborations between the WPI and Commonside Community Development Trust (New Horizon Centre) in recent years.

Usually a project of this sort involves a small team but unfortunately due to visa and other difficulties, only one student, Daniel Soltren, completed the trip from Worcester, Massachusetts to join us here in the UK in early May.

Daniel had carried out some research on the project back in the States and had done a couple of skype calls with us.  He had started to investigate the service we provide through Wimblecomm at the WCA and was also looking into comparable websites based here in the UK (such as My Community Space) and those based in the States and elsewhere.

When he arrived on these shores Daniel had a tour around the borough and got an opportunity to interview several of the venue operators registered on our site including South Wimbledon Community Association, the Polka Theatre, the Mansel Road Centre, the Friends of South Park Gardens and Commonside.

He also met with some of the other organisations we work with including MVSC, Love Wimbledon, Superhighways and we also managed to secure a fascinating telephone interview with the CEO (George Cook) of My Community Space.  He also met the WCA trustees, secretary, staff and our website developer. We also supported Daniel in carrying out an on-line survey which sought to complement and enhance the survey we carried out in 2017. 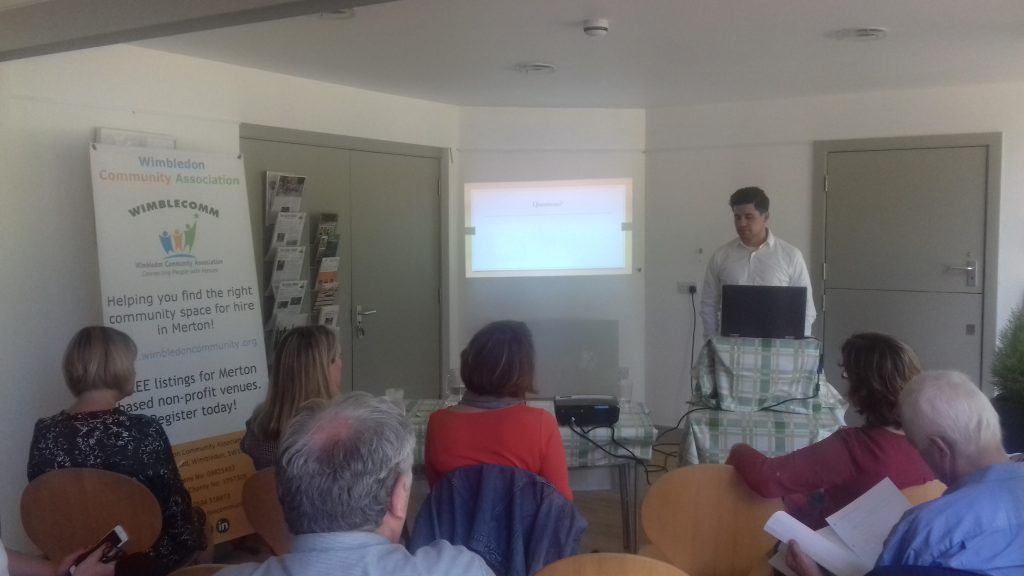 The final report is still being drawn together, but the project in the UK culminated with two identical presentations at South Park Gardens Pavilion on 18 June to a total of around 20 people. Daniel’s final recommendations were summarised as follows (the full slides are available on request):

It was useful to get an outside perspective and Daniel’s recommendations partly reflected some of our own thinking. We are looking into the emphasis we give to each finding and are already embarking on addressing some of the issues identified.

Certain interviews, such as the one with George Cook, were also very helpful.  We are looking at some options on how to collaborate with My Community Space in future.

Daniel was among a number of students working on a variety of WPI projects which take place here in the UK in Spring and Summer each year and if anyone is interested in doing something with them in future here in the UK, they can be contacted via the Programme Co-ordinator, Dominic Golding here: golding@wpi.edu.

Our thanks to Daniel, his tutors and to Dominic for choosing to work with us; we wish the programme and Daniel all the very best in the future. Our thanks too, to all of those who helped on this project, in particular Naomi Martin of Commonside Community Development Trust.