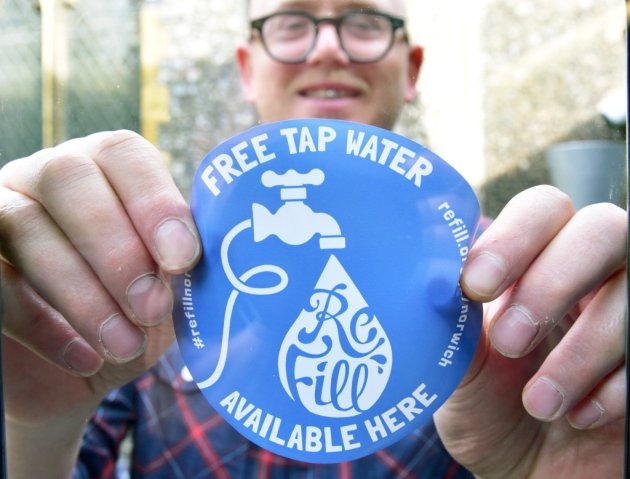 This week has seen the launch of Refill Merton, the latest addition to Sustainable Merton’s #PlasticFreeMerton campaign. Refill is a national award-winning scheme by City to Sea that tackles plastic pollution at the source. It’s estimated that the scheme, now being rolled out nationwide with support from Water UK and local water companies, will cut plastic bottle use by tens of millions each year. Through bringing a local Refill chapter to Merton, Sustainable Merton aims to disrupt the social norm of buying bottled water when on-the-go, and make carrying a reusable bottle the new normal.

Research shows that despite more people than ever carrying reusable water bottles, over 71% of us feel uncomfortable asking for a refill if we’re not buying something at the same time. How does Refill work? Through the Refill App, Refill empowers people to ask for free tap water by connecting them with businesses where this is welcomed. By displaying a window sticker, Merton residents can easily identify friendly local Refill Stations.

Refill Merton officially launched on Wednesday 22nd January with a ‘Refill Station’ outside Lakeland in Centre Court Shopping Centre, Wimbledon! If you didn’t manage to pass by, you can still take a plastic-free pledge by using the Refill app, and helping Sustainable Merton combat plastic pollution one Refill at a time!

Tackling waste and overconsumption is a primary pillar of action at Sustainable Merton. Through their #PlasticFreeMerton campaign, they aim to inspire local people to take action and are excited to make Refill a part of the solution. There are already over 50 Refill Stations in Merton, but more work needs to be done. Through Refill Merton, Sustainable Merton will connect these businesses, raise public awareness, and spread the campaign to underrepresented areas.

By using the Refill App and saying no to single-use plastic, you are helping to protect our oceans, combating climate change, and saving money all at the same time. Download the Refill App today at refill.org.uk.

Visit www.sustainablemerton.org to find out more and come show your support at the Refill launch event!

Diana Sterck, Chief Executive of Sustainable Merton said: “If you don’t have refillable water bottle already now is the time to get one. With more and more businesses signing up to Refill, filling your bottle on the move will be the new norm. Sign up to the Refill app and you are ready to go!”

Natalie McClue, Refill London Coordinator added: “We’re so excited that Refill Merton is joining the Refill movement and making a real difference by reducing reliance on single-use plastics. Every time we refill a re-usable bottle we save our own money and the planet’s resources, and all those individual refills add up to a huge impact. It’s great to see so many local businesses supporting Refill Merton by signing up to provide free refills.”

Rachael Edwards, Community Champions Project Manager and Volunteer Coordinator at Sustainable Merton also added: “Combatting plastic pollution is an issue that is close to the heart of many of our volunteers. If this is something that you are passionate about, consider joining us as a Community Champion. We will help you become an ambassador for sustainability in your community.”

Michael Roberts, Water UK Chief Executive commented: “As an industry with a strong focus on the environment we are passionate about tackling the problems caused by plastic bottles, which clog up rivers and drains, and pollute our seas. By refilling water bottles, we can all help turn this harmful tide of plastic waste. This country has some of the best drinking water in the world and we want everyone to benefit from it. This scheme will do that by making it easier for people to refill their bottles wherever they work, rest, shop or play.”