Putney & Wimbledon Brass Band was formed in 2017 as a community music group bringing the traditional British sound of brass music to south west London. Starting from a small group, the band now boasts more than 30 players from the local area.

You can hear the band play outside the Alexandra pub in Wimbledon on Sunday 7 July, and at Wandle Park Bandstand from 3pm on Sunday 21 July.

This local brass band recently picked up three prizes in a series of brass band competitions, including an award for the best newly-written march.  The annual Whit Friday contests take place in villages in Yorkshire, a tradition observed for well over 100 years.  The competitions attract the best bands from around the world, with bands travelling round the villages in one day, playing in as many events as possible.

Putney & Wimbledon Brass Band visited six villages this year and picked up cash prizes in three of them, competing in the fourth section. Bands are divided into sections and they can compete to be promoted – just like divisions in football!

The band had commissioned the renowned brass band composer Derek Broadbent to write a march to celebrate the band’s first birthday at the end of 2018, with the aim of wowing judges with it at Whit Friday. The tune was named ‘P.W.B.B’ after the band, as is traditional for ‘signature’ brass band marches.

The band’s investment paid off, as they won £100 for the best march written in the last four years at the competition in a village called Diggle, and picked up cash prizes in Lydgate and Greenfield for their performances. The band completed the weekend with a mini tour of Yorkshire, performing at charity fundraising events as part of the Holmfirth Arts Festival and in a local park.

“I’m so proud of what the band has achieved this year. Yorkshire has a strong brass banding tradition, so it means a lot to get this kind of recognition for a new band like us. Very few London bands are brave enough to make the trip!”

Commenting on the band’s performance in written feedback, Diggle contest adjudicator Tabby Kerwin wrote that the band had “good style” and “a great cornet solo”, and she thanked the band for “bringing something new and exciting”. 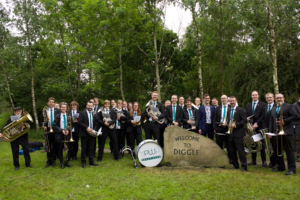