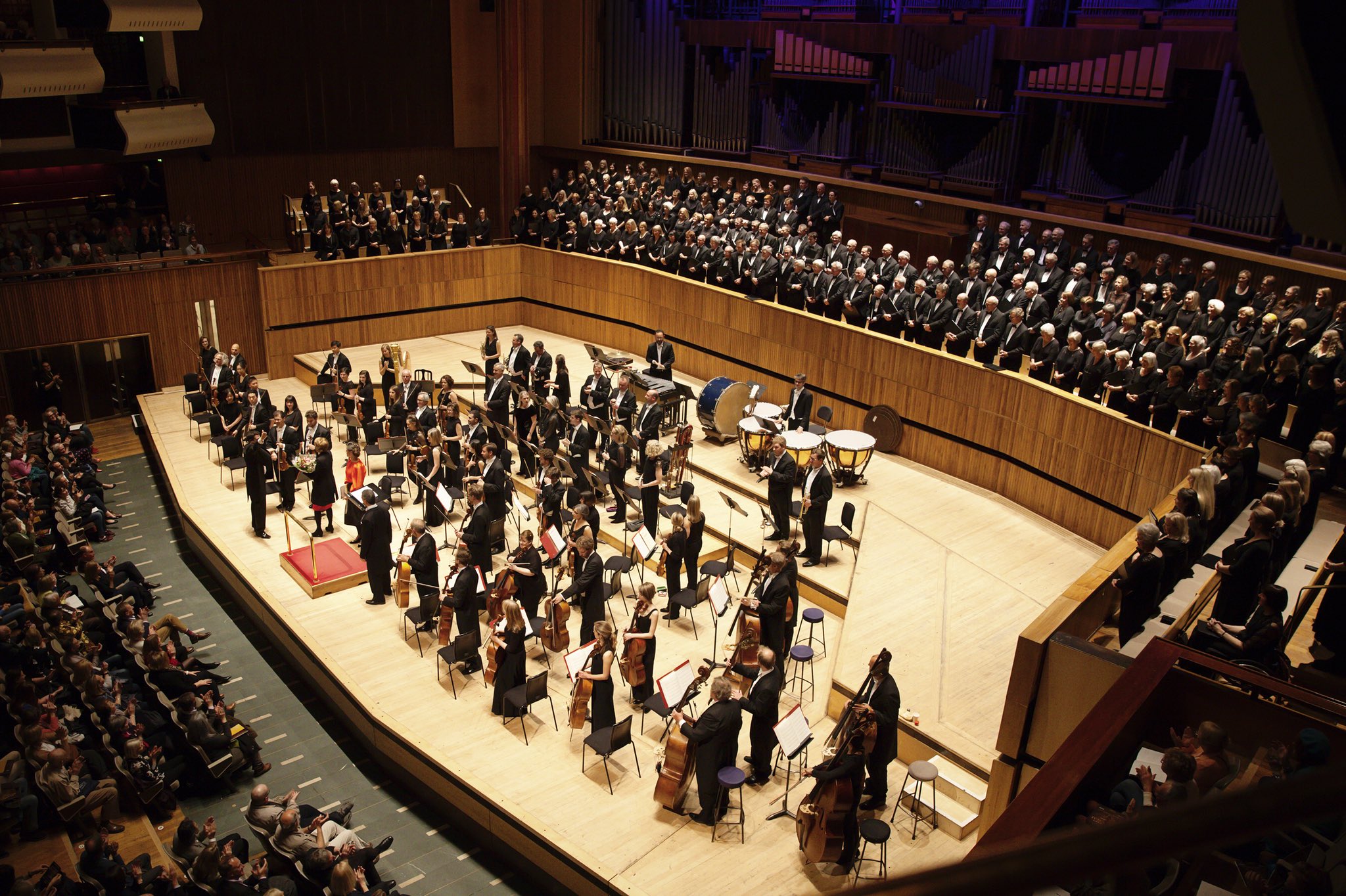 It was a sell-out audience at the Royal Festival Hall that awaited the world-premiere of Cecilia McDowall’s Da Vinci Requiem. They would not be disappointed.

Having been commissioned by the Wimbledon Choral Society (WCS) to mark their 100th birthday in their 2014/15 season, Cecilia McDowall’s well researched and majestic composition used insight from family-owned editions of Da Vinci’s Notebooks on the nature of mortality and all that it encompasses. Coincidentally, the evening’s performance was just a few days after the 500th anniversary of Da Vinci’s death. A timely premiere!

Together with the Requiem there was a rich diversity in the simple verse choral pieces of Vaughan Williams ‘Five Mystical Songs’ which sets poems by George Herbert from the collection The Temple: Sacred Poems, 1633. In addition to the splendid 180 strong Wimbledon Choral Society, the audience was delighted to have present a stellar group of musicians: Music Director of WCS, Neil Ferris conducting the wondrous world-class Philharmonia Orchestra whose home is in the Festival Hall; pianist Martin James Bartlett, BBC Young Musician 2014; star lyric soprano Kate Royal; and one of the most sought after baritones of his generation, Roderick Williams. The partnership between Roderick Williams and the WCS during the Five Mystical Songs took the audience on a journey that varied between “a musical climb towards heaven, either by floating serenely skyward, or in a blaze of glory.” Williams’ rich baritone was prominent in the first four of the Mystical Songs with the Choir taking a secondary role. A suggestion of pealing bells and exultation (“Let all the world in every corner sing”) introduced the final song of praise, Antiphon, in which the Choir is heard to truly wonderful and full effect.

Vaughan Williams, a former President of WCS, trained briefly with Maurice Ravel, the composer of the next offering: the Piano Concerto in G Major. From the moment the young 23-year-old Martin James Bartlett commenced his jazzy take on the piece, the audience was electrified by his fearless technique and a wisdom and elegance beyond his years. The first movement of four, Allegramente, was uniquely launched by a whip crack which lead to an energetic first theme. As has been acknowledged, the material in this movement is constantly shifting from Basque-inspired themes to jazz-infused melodies, reminiscent of Gershwin’s Rhapsody in Blue. The second movement, Adagio, has a lyrical, extended, expressive melody on the piano. The third and final movements introduced a frenetic pace giving the impression of a race between the piano and the orchestra to reach the end. The wit and colour in this young maestro’s playing was superb and the audience held nothing back in the acknowledgement of his ability. Thrilling to say the least.

We then came to the moment everyone had been waiting for. The Requiem. A winner of the British Composer Award for Choral Music, Cecilia McDowell’s Requiem, her largest scale choral work to date, showing an imaginative pairing of the Latin Requiem texts and extracts from Da Vinci’s Notebooks. The International Record Review describes her as having ‘a communicative gift that is very rare in modern music’.

The theory in Leonardo’s “Perspective of Disappearance” would in many ways be quite unintelligible if it had not been led up by the principles of light and shade. These principles apply to musical compositions through sound, articulation, notation, rhythm and character. Scored for a wide-ranging orchestra like the Philharmonia and under the superb expertise of Maestro Ferris, in the seven especially considered movements of the Requiem we saw this. Movement one, Introit and Kyrie with the Choir and two soloists, was marked as sonorous, dark and flowing. The second movement, with the soprano soloist, referred to Da Vinci’s painting Our Lady of the Rocks and the Poem by Rossetti and could be described as poised with intensity. The Choir excelled in the third movement with tender simplicity which contained a stand-alone anthem: a musical setting of a religious text. And for modern life but from the ancient Notebooks themselves: “tears come from the heart, not from the brain”. This movement was the most melodic of the Requiem. Sanctus and Benedictus, the fourth movement, was at the heart of the work: rhythmic with energy, lyrical and expressive. In the next movement, Agnus Dei, or Lamb of God, was marked as expressive and intense and provided references from Leonardo’s Bestiary on the purity of the lamb. For the baritone soloist, the penultimate movement referenced Leonardo’s text comparison between sleep and death “O you who are sleep” which gave the audience a mood of calmness, like a lullaby. In the final movement, Lux aeterna provided a “bright, luminous and shimmering quality” which was effected by tremolando strings: the combination/alternation of bow and finger. The text in this movement combined the Latin mass with Leonardo’s words: “Once you have tasted flight, you will forever walk the earth with your eyes turned skyward, for there you have been, and there you long to return”. These 16th century words were interesting given Leonardo’s life-long fascination with flight and the drawings he left behind of “flying machines.”

To celebrate the extended and richly-deserved applause from the audience, the composer herself, Cecilia McDowall, joined the orchestra stage to further congratulatory applause . It was a most satisfying and enjoyable evening for the audience and the genuine warmth and affection amongst all the performers should be noted. I am sure that Signore Da Vinci himself would approve: Fantastico!