The Year 2019 with the Commonside Trust 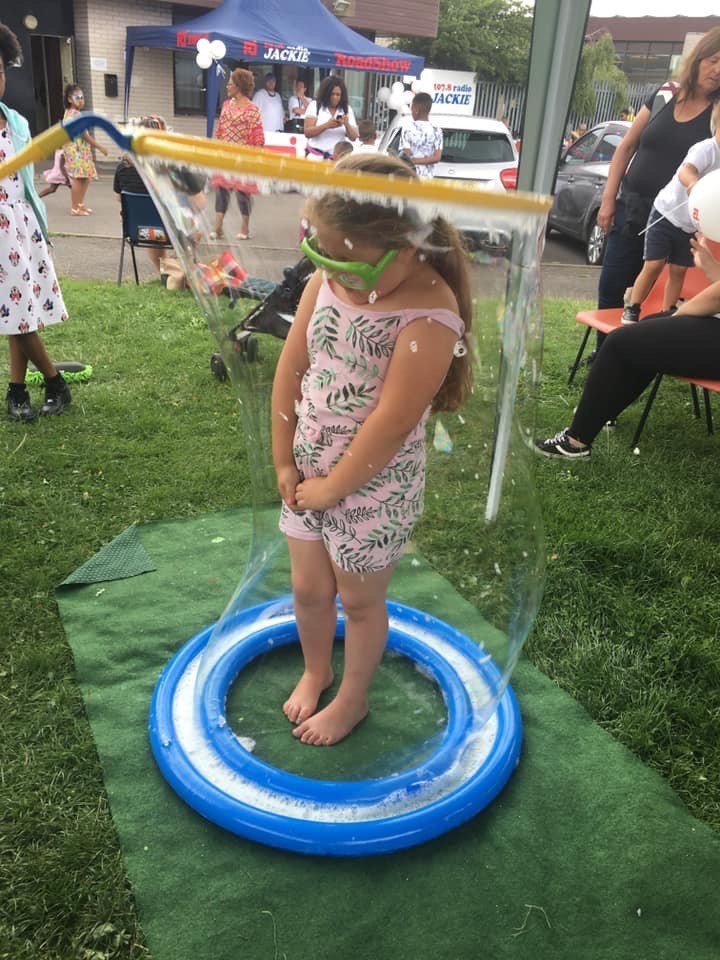 Here is a whistle stop tour of some of the good things that we made happen in our part of Merton this year. We are proud of all of them!

Our lovely volunteer Mireille, who is living in temporary accommodation (a bedsit) with her daughters lost all her stored possessions in a fire at the storage facility on Purley Way. We launched a GoFundMe appeal and raised £400 for Mireille to either replace some of the items or put towards a deposit for a permanent rented space. Since then, although she is still in temporary accommodation (and was on Channel 4 News talking about it,) she has been promoted from Language Volunteer to Teacher of French at the Harris Academy Merton. We are very proud of her and hope she is able to find a permanent home with a bit more space in 2020.

As the lead pilot receiving organisation for Merton’s new Social Prescribing programme, we paused new referrals as we had become very stretched supporting those who had already been referred (or ‘prescribed’) to us. We were also spending a lot of time contacting newly referred people and setting up appointments, so we were bold enough to suggest a new way of introducing people to our service: the Drop-In Café.

Now, on Thursday mornings, anyone to whom Commonside’s activities and support have been suggested by a member the Social Prescribing Coordinators’ team, can pop into our centre for a free tea or coffee, light snacks and a chat if they want. They can meet the Step Forward team who provide most of the support, and make an appointment to follow up if they wish. This has increased levels of motivation amongst the people being referred and improved our take-up rates. We have also gained some new volunteers who run the café. We have also added a monthly Wednesday evening café, from 6pm – 8pm to cater for those who can’t make it on a Thursday morning. 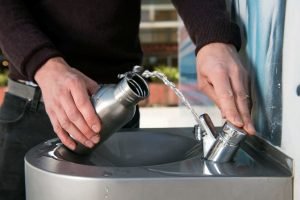 With enormous and generous support from our sponsors Route7 we introduced free drinking water in our café area for anyone needing a drink. We signed up to the Mayor of London’s #FreeTapWater network and have been busy sourcing drinking cups and bottles that have a lower environmental impact. Root 7 have also been very helpful in building up our website content.

Great fun was had by all at our intergenerational Easter egg hunt. All the children had to buddy up with an older member of the community in the Lunch Club to solve the clues of the Hunt and find the eggs, which they then shared. We got a lot of (chocolatey) smiles at this event!

In May we heard from the Community Grants panel who advised that our bid for new equipment had been partially successful. We were able to order a new dishwasher for the Lunch Club as the old one was over 20 years old and costing a lot in repairs and maintenance.

Later in the month, as a part of our Community Partnership Programme with South West London and St George’s Mental Health Trust, we ran a free Reggae-oke for older African and Afro-Caribbean members of the community and discovered new singing and dancing talents. The afternoon also provided a chance to talk about mental health in a gentle way and provided information about Merton’s Mental Health Services.

By June, our partnerships with FDB Training and Youth 24 were going well. We had some young people interested in Graphic Design doing work experience, and were successful in a bid for co-financed European Social Fund grant funding from London Learning Consortium. In the same month we hosted a Jobs Fair with DWP/Jobs Centre Plus, Moat Foundation and United Living where we signed up over 20 people to our new FDB programme. Many of the students on this programme have since then gained employment and are still working now.

July saw the start of this year’s involvement with NCS The Challenge, a form of collaboration that we have enjoyed for the past several years. We hosted and supported two groups of around 20 young people aged 15/16 who were successful in their bid to the Challenge ‘Dragon’s Den’ for start-up funding, and run fund-raising and social action activities for and with us. We sent a representative to be a ‘Dragon’ at two other Challenge activities. As a result of our collaboration, we have a new wall of art-work in the lounge area created by the students and our Lunch Clubbers, and we have some great new garden areas. 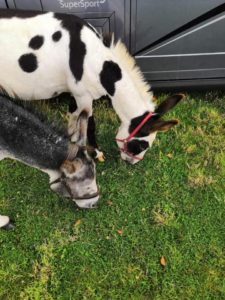 August was jam-packed with activities that included an activity on every single day of the school holidays except Bank Holiday Monday, during which we also made sure that no child went hungry. We ran keep fit, craft activities, cooking (and eating!) football and fitness with our partner Head4Goal; we organised a seaside trip for those not able to take a holiday this year and prioritised children with disabilities for this trip. Huge thanks go to Moat for sponsoring these holiday activities.

To mark 50 years of business for Paul Strank Roofing, Paul Strank Charitable Trust brought Radio Jackie to our Fun Day for all local families at the start of August. We had inflatables, donkeys, music, a BBQ, popcorn, cakes, a tombola and information from other local charities. Paul Strank CT also brought actor Danny Boy Hatchard to the event, to the delight of many EastEnders fans, and we have the photos to prove it!

In September it was ‘back to school’ but no sooner had term started than we hosted six Year 11 work experience students from St Mark’s Academy. They spent a very enjoyable week with us, learning about adult social care, catering and the Lunch Club. They learnt a lot and so did we. We have the Silver Level Quality Standard with Fair Train which enables us to be much more confident about what we can offer young people and how best to run our programmes.

No Harvest season is complete without Line Dancing, and this we did, with Paul from Wimbledon, providing a relaxed space to learn some new moves, laugh and discuss ways of looking after our physical and mental health.

In October half term we ran a trip to Garson’s Farm for parents and children, picked pumpkins, brought them back and made lanterns. We also kept the insides and used them to cook some new recipes.

October was also the month when we were very proud that our Pollards PASS Kicks Programme was filmed by a film crew from Premier League Football and a video clip promoting the Kicks Programme featured ‘our boys’ as well as other young people from around England. We later received a second video clip that was ‘exclusively Pollards’ and that makes us very proud of the work we do in the community with young people.

We also ran a series of three films about mental health in the family, in partnership with FilmMerton and with the support of SW London and St George’s Mental Health Trust, with a chance for supper and a chat afterwards. This was a new venture and we are looking into how we could continue it.

In November, we got very excited at the prospect of a new lounge carpet, newly decorated toilets for the lunch club, new fire doors and a new water system. These may sound a little dull, but they are not when the lack of hot water pressure has driven us nuts for years, when the previous doors’ frames were askew with the doors, the carpet never looked clean and the toilets were grotty and neglected. Many, MANY thanks go to our colleagues at Merton Facilities for their stalwart support running up to and including this exciting period for us.

The redecorating was undertaken as a joint project with Moat, Commonside and Sutton and District Training, who brought some trainees in to do the decorating as a part of their training. United Living provided the paint. Another facelift on a shoe-string, if such a thing can be envisaged! 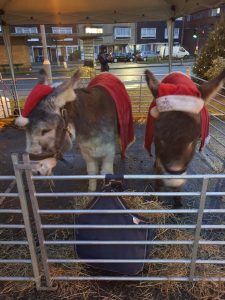 We held our Christmas Tree Lights event very early (actually at the end of November) because we had the chance of providing a full evening of entertainment for local people, from 3pm onwards. We had gingerbread cooking and decorating, cards and craft activities with Moat, information from the LETS Merton ESOL programme, hot dogs and falafels and DONKEYS (again! – thank you Mike’s Donkeys) as well as a lovely big tree from Hans Christmas Anderson (no kidding) – who also donated eight trees to the Paul Strank CT for use at the two children’s hospices in Surrey.

Thanks also to our two FDB Enterprise Graduates, who are launching their own gardening and garden clearance business, who cleared the front garden in preparation for the donkeys and the tree lights. Later the same evening, we hosted a community performance of The Last Noel from the Attic Theatre, which was thoroughly enjoyed by young and old.

In December we also ran a special “Pollards’ Got Enterprise” Day, showcasing four new local businesses that students of FDB Training have set up – gardening, decorating, Reiki and Aromatherapy and Beauty and Facial Massage treatments.

We dined with 60 older people on 12th December at our Lunch Club Christmas Dinner, with the Polling Station in full flow next door! We had a special afternoon tea with Paul Strank Charitable Trust, a singer on 17th December, and our Children’s Christmas Party on 19th December.

All we want for Christmas is a cuppa and a chance to put our feet up! Merry Christmas and bring on 2020!

If you want to get involved with this great community moving forwards, you can visit the Commonside Trust at the New Horizon Centre in Pollards Hill, and enquire about their many spaces for hire here on Wimblecomm,

PrevPrevious“And The Show Must Go On!” – A Carlton Theatre Group Review
NextThe Year 2019 with Everyday ChurchNext