Potsdam 4 Pelham (Dads) 4 – but the Germans still win on penalties! 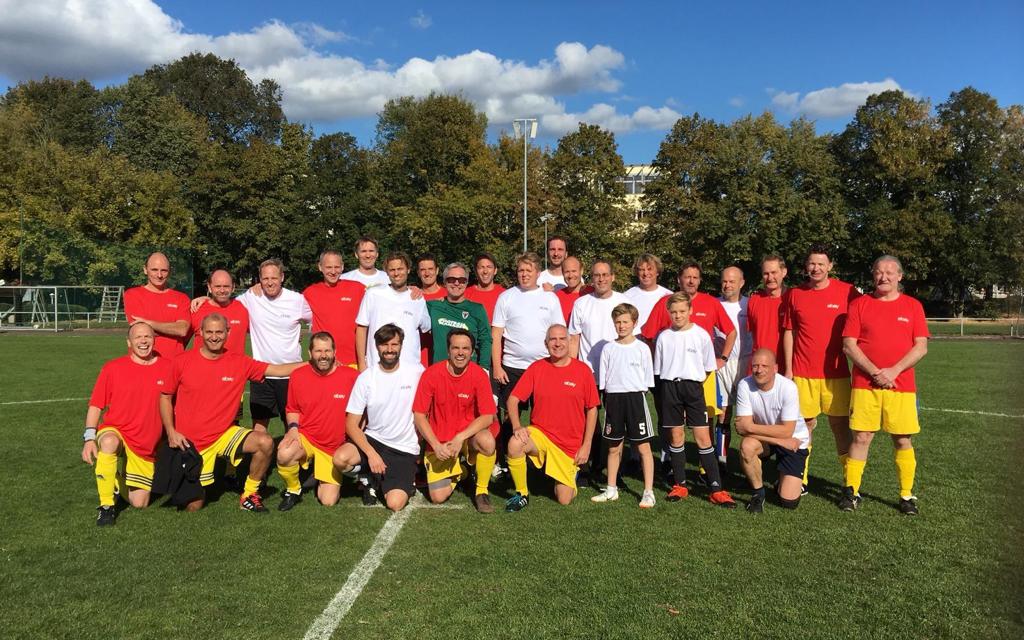 About ten years ago I went to a local party also attended by other parents from one of our venues, Pelham school Pelham Primary School Wimblcomm Listing and came across a weekly 5aside football group which some of the dads had started.

I’ve never been the greatest footballer, but I joined the fun and a decade later the group are still going strong, thanks mainly to the efforts of Alan Baxter, (former parent governor) despite many of us no longer (or in a few cases, ever) having kids at the school! Some of the lads even play with us now.

Over the last 6 years we have also added a weekend trip abroad to our itinerary and annually pit ourselves against a team put together by a contact in another European city.

After trips to Amsterdam, Poland, Latvia, Vienna and Madrid in previous years the 2018 trip in late September was to Berlin to face the German Ebay team.

We generally play in an old strip, acquired from AFC Wimbledon when we started out, although our hosts kindly donated some tasteful red shirts (perhaps with a nod to the 1966 England kit?) which nicely clashed with our yellow shorts and socks from our own local team…

Set against a picturesque Potsdam backdrop of a castle and a river, the 11 aside match was an eventful affair finishing 4-4, thanks to an injury time equalising goal from our hat-trick hero, Mark Spiteri.

It went to penalties and, much to the amusement of all concerned (including Susanne, in the WCA office, who hails from Kiel – close to the Danish border), the Germans won of course. But they were generous hosts and shared a few beers and some interesting regional delicacies afterwards.

The crucial penalty miss was from my cousin, Graham Brown, who many considered the man of the match – until then! Graham is also known to us at the WCA for having given up his time to help clear the old community centre with Jackie, Alexander (my son) and myself back in 2013 – so he’s not all flawed.

These trips abroad are of course a chance to absorb European culture (long may it continue should Brexit happen) – as well as sampling the local cuisine and beverages on the way. We also managed to get some other exercise in.

A few of us did the local 5km Parkrun – fast becoming an international institution – did you know the second ever Parkrun was on Wimbledon Common in January 2007 (and still going strong)? Some of us also managed to jump on a bike for a few hours on Sunday morning – one of the better ways to see a European city I find.

Who knows how long the 5aside will continue (perhaps we should be considering walking football at our age?) but I think it is a testimony to the excellent community spirit engendered from our coming together at Pelham – and continuing to meet up many years later.

If you have a particular link to one of our venues and would like to tell a story about how it has brought together the local community, please send it to us – we’d love to hear from you!