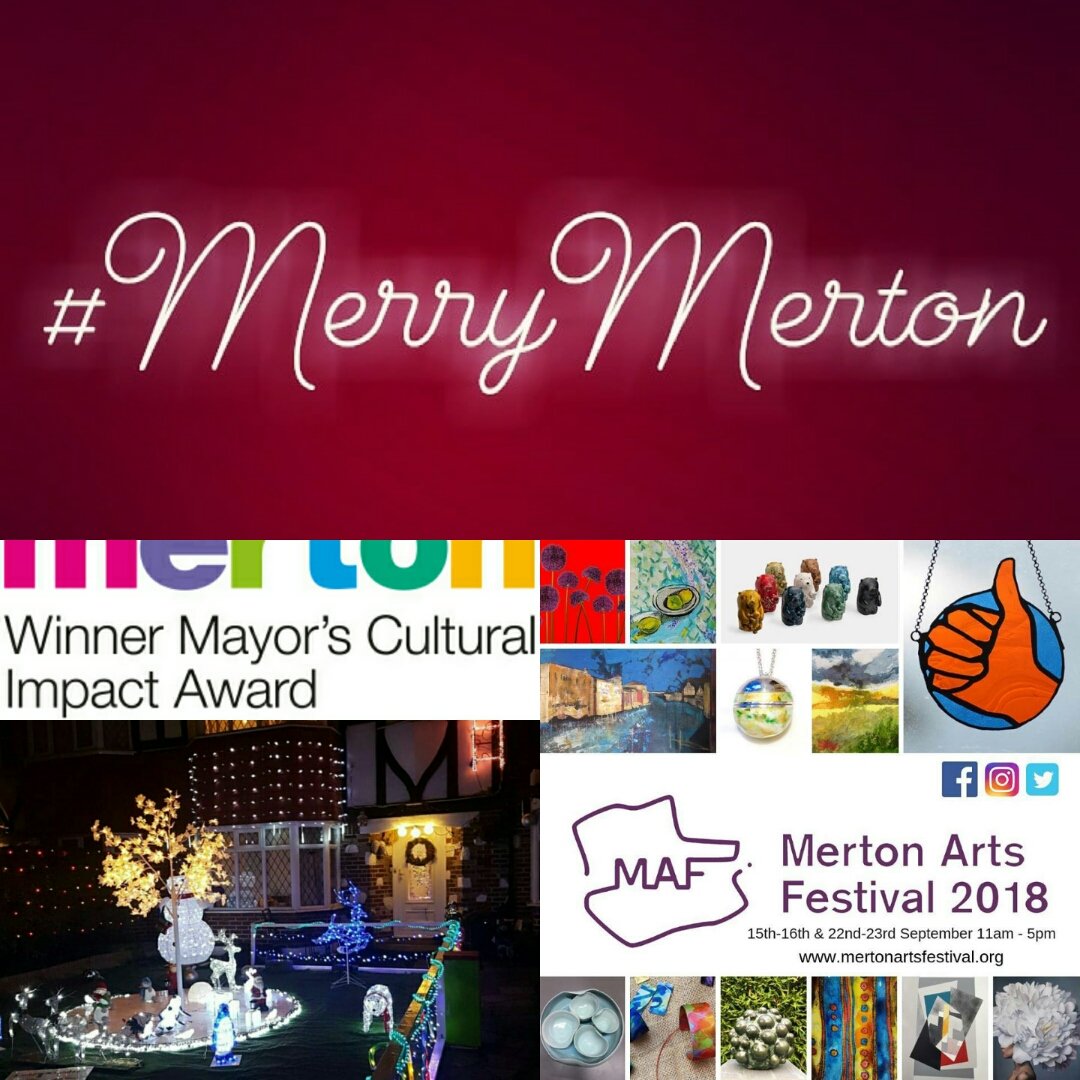 Throughout the month of December, we took to social media to share 31 merry memories of great things that have happened across Merton during 2018. If you follow us on social media or subscribe to our Community Bytes newsletter, you will already be aware of #MerryMerton and can now read our summary of some of Merton’s Best Bits of 2018 below.

With so much festive activity happening in the lead up to Christmas, it seemed rather fitting to launch our Merry Merton campaign with the beautifully lit Love Wimbledon Christmas Tree located outside Wimbledon Station. Despite the beauty of the tree itself, this wonderful festive addition to Wimbledon also featured a signpost which offered directions to various local theatre shows and community spaces including the Wimbledon Winter Wonderland which took place on the first weekend of December.

By the second weekend of December, festive celebrations had extended further than the Broadway and travelled up into Wimbledon Village where an action-packed family day entitled Christmas in the Village took place. The day itself included an appearance from Santa, a performance from the Wimbledon Choral Society, and the switching on of the Christmas lights by the War Memorial.

With so much happening in Wimbledon Village, our attention was then drawn to Wimbledon Common which hosted several memorable events during 2018. The two events that we focused on during #MerryMerton both occurred in October; one was Wimbledon Guild’s Waggy Walk which saw the Common welcome almost 200 dog walkers, friends and families, and their dogs. By coming together for this event, everyone involved raised £5000 to support people affected by social isolation and loneliness, which featured as one of Merton Giving’s Giving Stories last year. 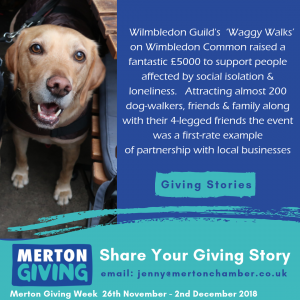 The second event was Wimbledon Bookfest 2018 which created 10 Magical Days on the Common. With its large volunteer input and a small team of core workers, the festival was a great success and sealed its place as one of Wimbledon’s highlights of the year! To find out more about this great festival, you can read a synopsis of one of the festival’s sold out events of 2018 on our Wimblecomm blog and see what this year’s festival entailed in the September edition of our Community Bytes newsletter.

As a local charity in Merton, we love to see people come together for the greater good of the community as they did above, and greatly appreciate the work of volunteers who take their time and efforts to give back to others. In line with this, we celebrated Local Charities Day on 14th December 2018, and used #MerryMerton to celebrate charitable events that occurred across the Merton borough throughout the year. Although we didn’t manage to cover everything, please find the ones that we did below.

Day 6 of #MerryMerton – For the third year running, we sponsored a tree at Trinity Wimbledon’s Christmas Tree Festival which raised money for London’s Air Ambulance. It was a cracker of a tree!

Day 11 of #MerryMerton looked back to Merton Voluntary Service Council’s Partnership Volunteering Awards at Tooting and Mitcham FC’s Events Hall where we celebrated Merton’s fantastic volunteers. At the awards in June, our WCA Secretary Jackie received the Outstanding Contribution Award! You can read more about the night in our June Community Bytes newsletter which is available to read via the News section, and you can find out more about the MVSC on their website.

Day 19 of #MerryMerton supported Age UK Merton as they hosted a week of Christmas dinners to help older people get together and celebrate Christmas with their friends. Donations from the public were welcomed to support this effort to reduce loneliness in Merton.

Day 20 of #MerryMerton reflected on National Libraries Week which took place in October 2018. Within this week, Merton Libraries held numerous events which showcased the way in which they bring communities together, help to combat loneliness, and provide a space for reading and creativity. You may have found a number of these events listed on our Community Noticeboard as well as a review on Merton Arts Space in our October Community Bytes newsletter. Do remember to get in touch if you would like to submit an event or review to be published on our blog or in our newsletter!

Day 24 of #MerryMerton focused on abundance. An abundance of community spirit, opportunity, growth and love. These are all things that we had seen in Merton throughout the year and during the festive period. Speaking of growth and opportunity, we then celebrated Abundance Wimbledon. Abundance Wimbledon is a fantastic project that uses surplus fruit growing in gardens and public spaces in Wimbledon to do good for the community. It supports people who are struggling to pay for food and uses local produce to create anything from jams to cakes. You can read more on Abundance Wimbledon in our September newsletter which features a review of the Abundance Fruit Day which took place in September 2018 at one of our listed venues, St Mark’s Church in Wimbledon.

Day 30 of #MerryMerton remembered when Wimbledon College of Arts students and Merton Council collaborated to win £1000 for the Commonside Trust and Merton Mencap at the London New Year’s Day Parade 2018. We love to see creativity in Merton and love it even more when it supports great causes! Merton’s winning entry entitled Nature, the greatest show on earth, showed great creativity featuring a Bird of Paradise, Peacock, Camera prop and even a David Attenborough head! Read more about this on the Wimbledon College of Arts blog.

By now you will probably agree that there were a lot of great things happening in Merton throughout 2018, but we are not finished just yet…

In February 2018, the London Borough of Merton won a Cultural Impact Award as part of the Mayor of London’s Borough of Culture initiative. As a result, Merton received a budget to support projects specifically focusing on the cultural impact of film within the borough. To find out more about what this means for Merton and how you can get involved, check out David Hall’s article A Review of the Film Merton Launch in the December edition of our e-newsletter. The Film Merton deadline for applications has just passed so we hope you got your applications in on time, and we look forward to seeing what is in store for 2019.

Before school was out for the Christmas Holidays, we looked at some of Merton’s educational establishments and celebrated Ricards Lodge and Rutlish High Schools for being recognised on the Mayor of London’s Schools for Success programme as a result of their exceptional achievements. Whilst on the topic of awards, we marked 5th December as 10 months since the opening of the brand new re-developed Colliers Wood Library and congratulated them on being shortlisted for the Bookseller’s Library of the Year Award! What a fantastic achievement for one of Merton’s award-winning libraries, and the communities that help our libraries to thrive.

Another event to remember from 2018 was of course the Merton Arts Festival which celebrated An explosion of art in Merton, during the month of September. The event brought creativity in the form of walks, workshops, and galleries as it took over several community spaces across Merton including Merton Arts Space, the Holy Trinity Church, and Merton Libraries. Regardless of age, this festival literally brought art to our doorsteps making creativity accessible for all. Well done to the organisers and all those involved. We look forward to seeing what 2019 brings and hope to keep sharing the creativity on Wimblecomm.

They do say that all good things come to an end, so the Merton Arts Festival did eventually come to an end for 2018, but thankfully the creativity didn’t. In the latter months of the year, there was a fantastic Bauble Making Workshop at South Park Gardens where attendees were able to focus on the finest of details and decorate their very own Christmas Baubles. Jil Hall kindly shared her experience from the workshop in the December edition of Community Bytes and showed just how creative the festive season can be. 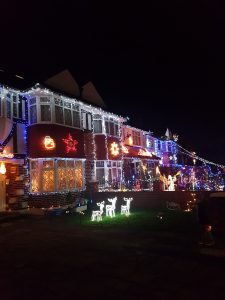 And if you managed to take a trip down Lower Morden Lane during December, you will have had a first-hand experience of just how creative things can be. On what is referred to as the most Christmassy street in the UK, residents decorate the front of their homes with extravagant Christmas lights and decorations whilst raising money for charities such as Children with Cancer UK & St Raphael’s Hospice. Even if you didn’t celebrate #Christmas, the Lower Morden Lane Lights made a lovely evening walk, showcasing the community spirit that we love and encourage on Wimblecomm and within our local communities.

For those that weren’t celebrating Christmas last year, we ensured that #MerryMerton was not just about one tradition, religion or faith, and used Day 10 to celebrate the end of Hannukah, the Jewish Festival of Lights. In English, the Hebrew term ‘Hannukah’ translates to “dedication” so it seemed fitting to take the time revisit the WCA/Wimblecomm’s aims of creating and supporting a strong community in Merton. Read more about us and what we aim to do for the community here.

Overall, last year was a very busy one for the WCA/Wimblecomm team as we worked behind the scenes to develop Wimblecomm into a unique online Community Hub for Merton. By the end of 2018 we had a growing Community Noticeboard featuring events taking place all over Merton, we had created our regular Community Bytes newsletter, and we were featuring more articles on our Blog. In October 2018, we had also crossed the century mark and reached 100 listings on Wimblecomm! This means that our website now lists over 100 community spaces that are available for hire within Merton, and you can enquire about these spaces directly through Wimblecomm with just the click of a button. At the moment, we still offer free listings to all not-for-profit organisations within Merton who hire out spaces/venues, and welcome all of these venues to start their listings today or get in touch for more information. As an added resource for the community, we also created a more basic Community Venue Directory which is separate to our listings and shows a list of all the venues (that we are aware of) that are currently hiring out space in Merton. If you have any to add or suggest, we would love to hear from you.

As we approach the end of #MerryMerton and acknowledge January as a month for setting new goals, doing new things, and perhaps keeping fit, we can recommend two of the following; Checking out the new courts at Cranleigh Tennis and Social Club (even if you end up in their new bar rather than on the courts,) and visiting the Polka Theatre for shows such as Into the Winter Wood which we reviewed in December.

We hope that you have enjoyed #MerryMerton with us and we look forward to creating many more merry memories this year. Happy 2019 and do keep in touch!