Membership | About WCA | Our People | Publications | AGM | Contact us 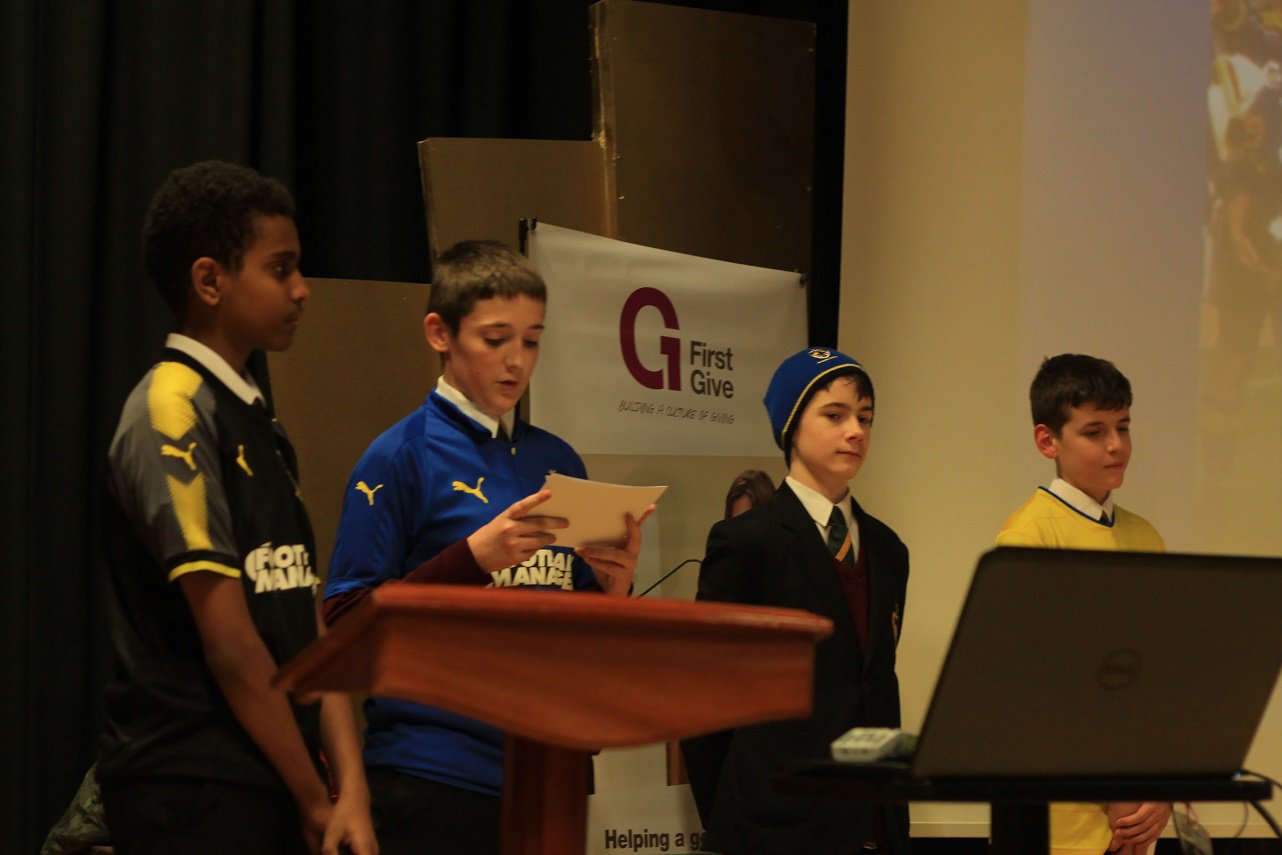 Wimbledon Community Association was very honoured to be asked to participate on the judging panel of a school project in one of our member venues, Wimbledon College just before Christmas. I attended to write up this report and our Chair, David Hall, was also delighted to attend as one of the judging panel. The project was being run by First Give, an organisation that works in partnership with secondary schools to help young people to give their time, tenacity and talents to improve their local communities.

The students’ task was to work in small groups to support charities chosen by the students. They had been working on the project for a number of weeks, developing a relationship with their charities and working on different ways to raise awareness of its work in their local community. All classes in Year 9 had participated, and seven presenting groups made it to the final to represent their class on Monday 17 December, at which they were to present the results of their findings to their Year 9 classmates, teachers and the panel of judges. The prize for the winning team was a £1,000 First Give Grant to be donated to their charity.

What was particularly striking was the range of charities selected, encompassing support for a mix of age ranges and social issues; Faith in Action dealing with homelessness; Born Too Soon fundraising for Kingston Hospital’s neo natal unit; Wimbledon Foodbank; Jigsaw 4U supporting children who face difficult times, for example, following bereavement; Stem4 targeting early identification of commonly occurring mental health issues in teenagers and AFC Wimbledon Foundation, promoting the power of sport, in particular football, to engage the whole community and change lives. In the latter case, the students highlighted the work done by AFC Wimbledon Foundation to reach out to people with dementia.

Teams were marked on their knowledge of their chosen charity, their creativity and delivery plus the social action and impact of their project. Throughout the presentations, there were excellent examples of creativity with poetry, video, computer graphics, social media interaction and role play. Some teams also managed to engage very imaginatively with their audience. They all successfully showcased the aims and work of their chosen charity, and particularly demonstrated great insight into how much each achieves with voluntary input and limited resources. All could convey the impact £1,000 would have.

The winners were one of two groups supporting Faith in Action, and were the group who best brought most of these features together.

Well done to all involved – the students and their teachers, and First Give, the organisers. Voluntary service is vital for all sorts of reasons, and this project will hopefully lay down the foundation of community spirit in this generation. Plus along the way, they’ve learned some key life skills – teamwork; research and public speaking.