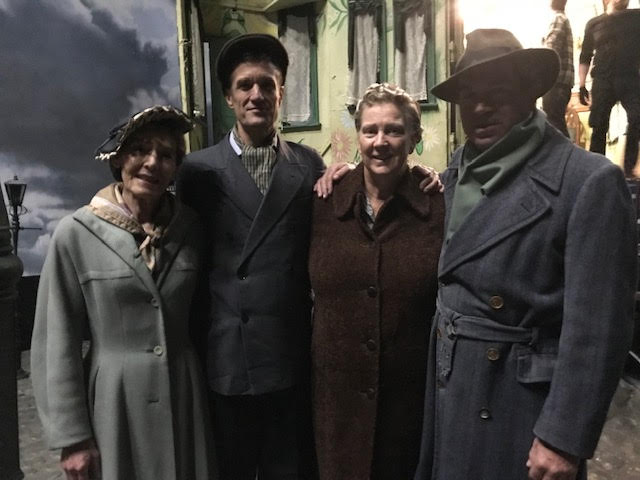 Local drama society, Carlton Theatre Group and former user of our old community centre, is now based at the William Morris Rooms William Morris House Meeting Rooms on Wimblecomm. However, rarely can a group of its actors have had a chance to play in front of eight sell out audiences of almost 1700, per performance, in the main Wimbledon Theatre. But that is exactly what happened to a small team of Carlton performers earlier this month!

To be fair, the four Carlton actors (including myself, my wife Jil, Raoul de Bunsen and Pamela Warren) were only unpaid ‘supernumeraries’, when An Inspector Calls, written by JB Priestly came to town from 2 – 6 October. However, the experience for anyone interested in theatre, was an invaluable one.

Carlton regularly gets contacted by touring groups or local casting companies asking for extras or actors to assist on student films and the like – and no doubt others have taken up other such opportunities.

However, the chance to perform in the award-winning production was too good to miss. In Stephen Daldry’s revival of the classic (which has been running since 1992) the ‘supers’ appear for about 15 minutes and operate akin to a silent ‘Greek chorus’ representing Eva Smith’s peers, observing and judging the disdainful and imperious Birling family who are indirectly responsible for Eva’s death.

In a dramatic finale the whole Birling façade literally and then metaphorically collapses following the Inspector’s damning condemnation.

The touring company and cast (made up of just seven actors and four understudies) were very welcoming to the Carlton team (plus three other ‘supers’ and a few local children) during a very hectic week. Following a trip to Cheltenham the company will then be taking the show to the States to perform at Washington DC, Los Angeles, Chicago and Boston over the coming months

As the play is a GCSE curriculum favourite and routinely attended by students, it may yet return if you failed to catch it this time.

The chance to pick our professional colleagues’ brains was also not missed. Carlton is performing Shakespeare’s ‘The Winter’s Tale’ in the more modest surroundings of the Wimbledon Theatre Studio from 13-17 November https://www.atgtickets.com/shows/the-winters-tale/time-and-leisure-studio/. Having discovered that Liam Brennan (who played the Inspector) had previously played Leontes (my role) in the Bard’s tragicomedy, I was delighted to extract a few useful nuggets on how to play the jealous, neurotic king! Liam has even said he may come to watch it before they head to the States.

Do support your local drama group. Carlton is now over 90 years old and is hoping to announce its new season of plays later in the year here https://www.carltontheatregroup.co/.  Anyone interested in getting involved in any capacity (including backstage) will be very welcome to come along to one of their open events or auditions in the new year at the William Morris Rooms.

As whilst it may be true that ‘all the world’s a stage’, why not ‘screw your courage to the sticking place’ for the ‘valiant never taste of death but once’….

And well done to anyone who spotted that these are all Shakespeare quotes!

PrevPreviousPotsdam 4 Pelham (Dads) 4 – but the Germans still win on penalties!
NextEvent Review: Max Hastings at the Wimbledon BookFest October 2018Next